Below are past and current projects of which I am the principal investigator.

As the world has seen all too well last summer, drought is severely threatening our ecosystems and their functioning. It can cause strong shifts in plant community composition, which might lead to a new ecosystem state from which it is difficult to revert back. These shifts can have severe consequences, including a loss of species, habitat, and ecosystem function. While we would expect drought-adapted species to increase after drought, often we see a counter-intuitive increase in plant species that should be vulnerable to drought. Here, I will test whether these ‘vulnerable’ species, that also happen to be on the rise with nitrogen enrichment and habitat loss, use the fungi and bacteria that live in the soil to improve their own regrowth after drought, and whether this causes persistent shifts in plant community composition. Me and my team will do this by using a number of long-term drought experiments across Europe, and by reviving a Dutch long-term drought experiment at Oldebroek (Veluwe). We will also set up a new field experiment in a chronosequence of abandoned agricultural sites, which form a gradient of different plant communities. Combined with targeted mechanistic experiments, state-of-the-art metabolomics and sequencing techniques, and statistical modelling, these experiments will elucidate the role of changes in soil microbial communities in drought-induced shifts in plant community composition. This knowledge is crucial for predicting and mitigating the effects of drought on our ecosystems and preventing irreversible shifts in plant community composition.

The European sampling locations that we will use to test our hypotheses on how microbial traits affect their response to extreme climatic events. 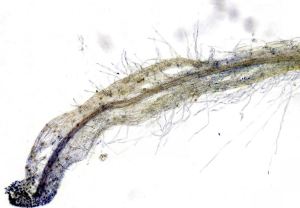 This project tests the hypothesis that ecosystem response to climate change will change along a primary succession gradient in a glacier foreland, and identify the relative role of soil and plants in modifying this response. Specifically, we will test whether the resistance of plant performance and soil processes to warming and drought will increase with ecosystem age. We hypothesise that with increasing ecosystem age both plant performance (photosynthesis and respiration rates, and aboveground and belowground biomass) and soil processes of C and N cycling will become more resistant to both drought and warming. We use the well-characterised Odenwinkelkees glacier foreland chronosequence to test these hypotheses. This project will provide insight into fundamental controls of ecosystem response to climate change, and will quantify the relative role of soil and plants in this response.

The Odenwinkelkees glacier in Austria.

Me collecting soil cores from the Rotmoosferner glacier in Austria.